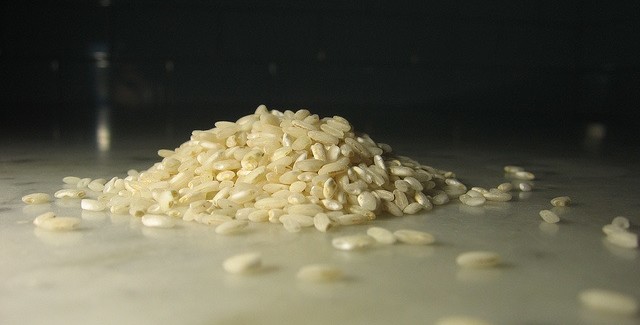 Arsenic in Rice? An Update

*This post originally appeared in October 2012 and has been updated to reflect current FDA guidelines.

Last year, registered dietitian Connie Diekman offered her thoughts on arsenic in apple juice. We’ve been hearing about arsenic in rice and rice products and the U.S. Food and Drug Administration (FDA) recently updated its consumer recommendations regarding arsenic in rice cereal. Should you be concerned about eating rice or feeding rice products to your kids? To answer a few questions about this topic, Best Food Facts reached out to Dr. Brian P. Jackson, Director of Trace Metal Analysis at Dartmouth College. Check out his “True or not?” conclusion at the bottom of the post!

What is arsenic? What’s the difference between organic and inorganic arsenic?

“Arsenic is a naturally occurring element; it ranks 46th in abundance in the earth’s crust and is found at low levels in soils and water. Inorganic arsenic is the form of arsenic that occurs geologically in rocks and is the main form we find in soils and water. Inorganic arsenic is toxic to most forms of life at certain concentration levels; for humans, it is a class 1 carcinogen and has also been linked to a number of non-cancer diseases such as cardiovascular disease.

“The tools we use today are so sensitive that nearly all food and drink products will contain some measurable arsenic. Arsenic gets into food mainly through natural processes where plants take up arsenic from the soil. This could be arsenic that is naturally in the soil, derived from the rock that weathered to form the soil, or it could have been introduced by agricultural practices that are no longer used.

“In the past, inorganic arsenic was used as a pesticide, especially on orchards. That practice was largely discontinued in the 1950s; however, we are still left with ‘legacy’ arsenic that contaminates many old orchard soils. Similarly, organic arsenic compounds were used to control weeds, especially in cotton production and on golf courses. The use of these compounds has recently been discontinued by the Environmental Protection Agency (EPA).

“A different organic arsenic compound, roxarsone, was used as a feed additive for poultry, turkey and swine. This raised concerns about levels of arsenic in chicken meat and also arsenic getting into soil through use of the manure as fertilizer, so, consequently, in 2011 roxarsone was withdrawn from use as a feed additive.

“Fruit juices have been implicated as potentially having high concentrations of arsenic relative to the drinking water standard of 10 parts per billion (ppb) for inorganic arsenic. One general hypothesis about why fruit juices could contain arsenic is that these juices are imported from countries where organic arsenic pesticides are still used. The FDA tests many juices and concentrates and has established an internal criteria of 23 ppb inorganic arsenic for juice, although the reason for this concentration limit is not clear. Consumer Reports urges a much more stringent level of 3 ppb; their 2011 study of 88 apple and grape juices found that 10 percent exceeded the 10 ppb (the safe drinking water limit) for total arsenic.”

Why is arsenic showing up in rice?

“The levels of arsenic in rice and rice products have also attracted a lot of attention. Compared to other grains, rice takes up, or absorbs, a lot more arsenic, and this arsenic ends up in the edible part of the plant. The unique flooded conditions under which rice is grown is the main reason that rice contains arsenic. In flooded soil, the arsenic is no longer strongly bound soil particles, but instead is present in the soil water and readily taken up by the plant. There’s now a lot of information on what factors control the concentration of arsenic in the grain. The most important factor is the type of rice, but other factors such as growing conditions, geography and soil type also have an influence.”

In 2013, the FDA released test data for the levels of inorganic arsenic in most types of rice and rice-based foods and beverages consumed in the United States. That testing was expanded on infant rice cereal because, relative to body weight, infants consume about three times more rice than adults, primarily through infant rice cereal. In fact, data show that people consume the most rice, relative to their weight, at eight months of age primarily because rice cereal is commonly the centerpiece of an infant’s diet.

Are there any potential health effects to consuming foods that may contain arsenic?

It has long been known that arsenic is a carcinogen. The FDA estimates that exposure to inorganic arsenic in rice and rice products causes an additional four cases of lung and bladder cancer over the lifetime for every 100,000 people in the United States. This estimate accounts for far less than one percent of the nation’s lung and bladder cancer causes.

More recently, concerns have been raised about potential developmental effects on infants as well as adverse pregnancy outcomes. The FDA completed a thorough analysis of scientific studies linking adverse pregnancy outcomes to intake of relatively high levels of inorganic arsenic during pregnancy. The FDA also found that exposure may result in a child’s decreased performance on certain developmental tests that measure learning.

What is a safe level of arsenic?

“There is no consensus on what is the ‘safe’ level. In Proposition 65, California has set a level of 10 micrograms of inorganic arsenic for daily exposure that would cause no significant risk levels over a lifetime of exposure. The EPA has set a limit of 0.0003 mg/kg body weight per day, which, for a 132-pound adult, would equate to a daily exposure limit of 18 micrograms.

“So, from one standpoint even daily single servings of most rice or rice products would not exceed these relatively conservative daily ‘safe’ levels. However, one needs to factor in arsenic exposure from other food sources and, most importantly, from drinking water, to fully estimate an individual’s daily inorganic arsenic exposure. For example, you might be on city water with an arsenic concentration of 5 ppb, and if you drink two liters per day then you are already exposed to 10 micrograms of inorganic arsenic. This doesn’t leave much room for significant exposure through food as well. However, there are other factors to consider for exposure via food; for example, not all of the arsenic in the food might be absorbed by the body. There are various studies reporting 50 – 100 percent absorption ability depending on the rice type and method of cooking.”

The FDA is issuing a draft guidance to industry proposing a limit, or “action level,” of 100 parts per billion inorganic arsenic in infant rice cereal. FDA testing found that the majority of infant rice cereal currently on the market either meets, or is close to, the proposed action level. This is not the first time the federal government has limited arsenic in foods or beverages. The EPA has set a limit for inorganic arsenic in drinking water, and the FDA has already set action levels, or recommended limits, for bottled water and apple juice.

How can you tell if food or drink contains arsenic? If I’m concerned about arsenic levels, should I eat local or organic food?

“There is really no way for the consumer to tell if a food contains arsenic, and I don’t think that eating local or organic necessarily affords much protection, either. We are not talking about very high levels here, but rather long-term low level exposure.

“While we are still not sure about the extent of the problem of arsenic exposure from rice, the solution seems quite easy. We already know a lot about the levels of inorganic arsenic in rice, and which types of rice absorb less arsenic and are relatively insensitive to other growing conditions, so manufacturers can source rice that is low in arsenic and growers can switch to types that take up less arsenic. Sourcing rice that is low in arsenic for products aimed at young kids or for the gluten-free market, where many products are rice-based, would seem like a prudent and proactive thing to do, even while we wait for the FDA to set some guidelines and regulations.

“For other concerns about arsenic and what to avoid, I advise concerned parents to consult with their child’s pediatrician.”

Should consumers be concerned about arsenic levels in food and drinks?

“Consumers eating a balanced and varied diet don’t need to be too concerned about exposure to arsenic through food. However, for young kids, especially infants and toddlers, who are potentially more sensitive to contaminant exposure, and for people who eat frequent (daily) servings of rice and rice products, then some concern is warranted.”

If you have an infant or are pregnant, the FDA and the American Academy of Pediatrics recommend:

Based on the FDA’s findings, it would be prudent for pregnant women to consume a variety of foods, including varied grains (wheat, oats and barley), for good nutrition. Also, published studies and new research by the FDA indicate that cooking rice in excess water (from six to 10 parts water to one part rice) and draining the excess water can reduce 40 to 60 percent of the inorganic arsenic content, depending on the type of rice. The FDA did not find a scientific or public health basis to recommend that the general population of consumers change its rice consumption based on the presence of arsenic.

Consumers can certainly eat rice as part of a well-balanced diet. Based on its scientific assessment, the FDA says it would be prudent for parents and caretakers to feed their infants a variety of fortified infant cereals rather than to rely solely on infant rice cereal.

The image “Rice!” by Simone Bosotti is licensed under CC BY-SA 2.0.