How Do Farmers Use Technologies to Produce More With Less?

As Tom Oswald drives a tractor across a soybean field on his farm, his eyes are on a computer screen that shows his precise location, the speed of the tractor, exactly how much crop protection material is being applied at each point and more. He can watch the screen closely because the tractor uses autosteer to move across the field in a straight line. 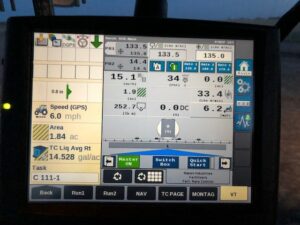 These technologies have become common on farms because of many benefits they provide for farmers, consumers and the environment.

“Farming uses technology rivaling the most digital of industries,” Dr. Griffin said. “Just like many of the cars our readers drive, farm equipment collects diagnostic data to push up to the cloud so that the manufacturer and farm operator can access that data for their purposes.”

Oswald became interested in precision agriculture because he wanted to protect the soil on his northwest Iowa farm.

“Our land here is gently rolling and I really wanted to focus on reducing soil erosion. I decided I needed to do something to better hold the soil on our gently rolling slopes,” he said.

Oswald began by reducing tillage – or the amount the soil is disturbed to plant seeds. When GPS technology became available, he used it to take soil samples to get an accurate picture of the soil in specific locations. Now, nearly every piece of equipment on his farm is equipped with precision ag technology. Innovation is now available to ensure exact seed placement, make precise applications of fertilizer and herbicide, monitor yields and guide tractors.

“By deploying technology, we can better place the products we’re putting in the field so we can do more with less,” Oswald said. “It’s like a killer app. Once you use it, you don’t want to quit.”

Farmers use a variety of technologies that work together to give them detailed information about their soil and crops grown for food ingredients and animal feed, such as soybeans, corn and wheat.

“Automated guidance is analogous to self-driving cars – at least for making parallel passes in the farmer’s field. Instantaneous sensors on crop harvesters measure yield, moisture, and quality characteristics every few seconds; and with GPS this data can be georeferenced into a map,” Dr. Griffin said.

That data is then used to determine the optimum plan for each precise location to grow crops using as few resources as possible.

“With knowledge of how soil nutrients vary spatially across the field, prescription of soil fertility amendments can be developed to apply fertilizer at site-specific or variable rates across the field. In the last decade, farm data has been a major consideration, especially with respect to aggregating individual farm data into communities of big data,” Dr. Griffin said.

How does precision ag improve sustainability?

Precision agriculture helps make farming more sustainable in many ways. By precisely applying fertilizer, seed and crop protection products, these state-of-the-art technologies lessen the environmental impact of farming. Farmers can also control their costs, which helps them to be economically viable so they can continue to farm. This also helps to keep food costs affordable as it enables growing more food while using less land.

Dr. Griffin said there have been some unexpected benefits, as well.

“When automated guidance was commercialized about 20 years ago, the technology seemed to have ubiquitous advantages for reducing overlap and allowing equipment operators to work additional hours in a day,” he said. “One of the greatest benefits was not measured with dollars but with satisfaction and improved quality-of-life from less fatigue. The less fatigued equipment operator could translate into greater satisfaction of the entire rural household from improved social relations.”

“In the past, tedious manual tasks have been automated; in the future, more complex tasks that typically have required humans with advanced skill sets will be automated,” he said. “The first steps have already been completed with data collection via sensors and transferring data to the cloud. Think of how self-driving cars have automated the task of navigating a busy street by replacing the human driver; then apply that type of technology to removing humans from the decision-making process.”

One day, precision farming might be combined with other advances, such as gene editing, to develop plants with disease or drought resistance, Oswald believes. Learn more about gene editing in agriculture.

“I think gene editing has powerful potential for humankind in understanding and addressing issues through genetics,” he said. “Because it is a precise modification, plants could be made better suited for the environment where they’re going to be growing. The next step could be a gene-edited crop that is planted in a specific part of the field.”

Farmers control much of precision ag technology through their cell phones.

“Mobile devices play a key role for each of the players in this system, and the importance of mobile devices is only increasing as precision agriculture becomes the order of the day for 21st-century farmers,” Dr. Griffin said.

Developed with support of United Soybean Board.