Are Natural Sweeteners a Healthier Choice?

How sweet it would be to have the delicious taste of sugar without the calories. Some sweeteners make that promise and natural sweeteners have been recently gaining attention.

Michelle Jaelin, a Registered Dietitian based in Toronto, helped us to understand the science behind these products and how they are best used in a healthy diet.

Some sweeteners are described as natural. What does that mean?

Jaelin: “Sweeteners that are described as natural are derived from a plant source. However, similar to artificial sweeteners, natural sweeteners have gone through processing and refining in order to become the sweetener you put into your coffee or use for baking.”

Is a sweetener the same thing as “sugar”? If not, what is the difference?

Jaelin: “Although both have a sweet taste, sweetener is not the same thing as sugar. The “table sugar” commonly used in food is sucrose, a disaccharide of glucose and fructose. Derived from sugar cane or sugar beets, sugar is a carbohydrate, essential for energy. 1 teaspoon of sugar has about 4 gram of carbohydrate.

“A sweetener is an ingredient added to food to provide a sweet taste similar to sugar, but with less food energy. Sweeteners are manufactured from a variety of natural (ie. plant), food sources (ie. sucralose is derived from sugar) and chemically created in labs. 1 teaspoon of sweetener (depending on the sweetener) usually has approximately 1 gram or less of carbohydrate.”

How do natural sweeteners compare with artificial sweeteners? Are they healthier or less healthy?

Jaelin: “This is the tricky part, because manufacturers can label their sweeteners as “natural” despite the fact that they have been processed and refined to taste sweet. For example, stevia is considered a natural sweetener because it is derived from the stevia plant, grown in South America.

“Artificial sweeteners, such as aspartame and saccharin (sold under brand names SugarTwin and Sweet’N Low) all have been chemically processed. They are sometimes called intense sweeteners because they are many times sweeter than sugar.

“Currently, there is not one type of sweetener that is healthier or less healthy than the other. The FDA approves the following six high-intensity sweeteners as food additives in the United States: saccharin, aspartame, acesulfame potassium (Ace-K), sucralose, neotame, and advantame.

“According to the FDA, sweeteners are considered safe to consume, as long as one does not consume more than the Acceptable Daily Intake (ADI) of the sweetener.”

How can a food additive have a sweet taste but no calories?

Jaelin: “The chemical structure of the sweetener is made so that it tastes sweet but has no calories. More information on sweetener chemistry can be found here.”

What factors should a person consider when choosing a sweetener?

Jaelin: “If you are choosing a sweetener, consider how much you will use and consume, and think about the taste. Some sweeteners have a bitter aftertaste. For example, chemical compounds found in the stevia plant interact with both the sweet and bitter receptors, leading to its signature bitter aftertaste experienced by many.

“If you are sensitive to bitter tastes, consider trying a different sweetener.

“If you have diabetes, obesity or a rare genetic disorder known as Phenylketonuria (PKU) or any other medical conditions, be sure to speak to your doctor or registered dietitian before trying any sweeteners.”

Is there anything that you should watch out for with natural sweeteners?

Jaelin: “Because sweeteners are 100-300x sweeter than sugar, they should be consumed in small amounts, whether natural or not or with other exaggerated claims.”

What are good guidelines to keep in mind for sweeteners and sugar in your diet?

Jaelin: “If you are trying to decrease your intake of sugar, sweeteners should not completely replace sugar. 100-300x sweeter than sugar, they can alter your sensitivity to sweetness, making you crave more sweet foods.

“Although sweeteners can be helpful for people with diabetes, in preventing tooth decay and for decreasing total amount of calories and carbohydrate intake from sugar, they should be consumed in moderation and should not exceed the Acceptable Daily Intake (ADI) for sweetener.”

Natural sweeteners are derived from various plant sources and can deliver a sweet taste with few or no calories. But they are not more or less healthy than other sweeteners and should be consumed in moderation. 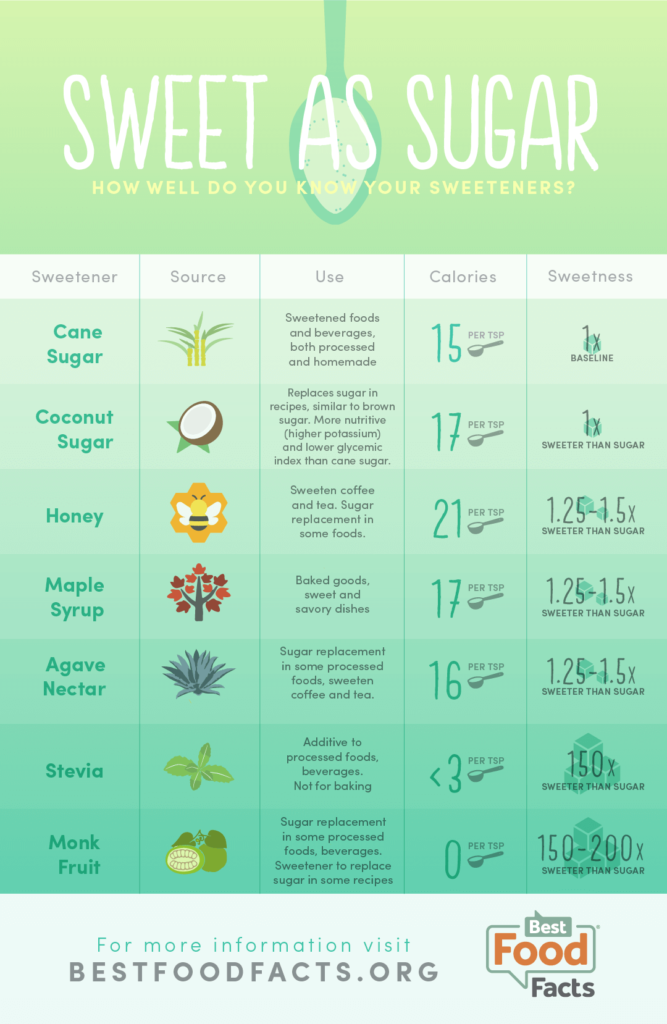