Bread and Beer Are Good for Your Gut

Fermented foods, like kombucha, are gaining popularity because of their health benefits. However, this method of preserving foods is not new—there are records of fermentation as early as 6000 B.C.

Dr. Robert Hutkins, a professor in the Department of Food Science and Technology at the University of Nebraska-Lincoln, recently published research about the beneficial microorganisms commonly found in fermented foods. We reached out to Dr. Hutkins to learn a bit more about fermented foods.

Registered dietician Anne Cundiff defined fermentation as “the chemical breakdown of a substance, carbohydrates, by bacteria, yeasts, or other microorganisms into acids, gases or alcohol. Common fermentation results in the production of beer, wine and other alcoholic beverages as well as leavening/yeast activity in bread products, lactic acid in foods like sauerkraut and yogurt and acetic acid in vinegars.”

Are there any dangers or disadvantages of fermented foods?

Dr. Hutkins: “Fermented foods and beverages have many desirable nutritional and sensory properties, which is why they are so popular. Indeed, fermented foods, like whole grain bread, yogurt, miso, red wine, and kimchi should be a considered as an important component of a healthy diet.

“Nonetheless, there are a few caveats. Obviously, while alcoholic fermented beverages have their merits, over-consumption has many health and societal dangers that most of us are well aware. Some fermented foods, like cheese and sausage, can contain high amounts of fat (and calories), whereas others, like pickles, sauerkraut, and kimchi contain rather high levels of salt. Pepperoni, salami, and other fermented sausages contain nitrite, which may also be a concern, so moderation is the key.

“There are also substances formed during fermentation called biogenic amines (e.g., tyramine and histamine) that can cause head-aches and nausea in susceptible individuals. They are occasionally present in wine, beer, aged cheese, and dry fermented sausage.”

Do fermented foods (not including alcoholic beverages) contain alcohol?

Dr. Hutkins: “Except for alcoholic fermented foods like wine, beers, and distilled spirits, fermented foods like cheese, yogurt, and pepperoni do not contain alcohol. When ethanol is present in fermented foods, it is often at very low levels. Thus, cultured buttermilk or sour cream may contain ethanol but it will be at concentrations so low (like 0.01%) it is even hard to measure. Indeed, this is about the same as that present in apple juice or bread.

“There are a few exceptions. In theory, ‘wild’ kefir (i.e., made with actual kefir grains) could contain a small amount of alcohol, but the kefirs available in U.S. grocery stores contain little to no measurable amounts. Vinegar, in contrast, does contain alcohol, with some products containing as much as 1%. Another fermented food that contains alcohol is soy sauce. Alcohol is produced naturally during fermentation, and alcohol may also be added as a preservative. Still the levels are low.

“Finally, kombucha is a yeast-fermented product that often contains alcohol. Indeed, there have been several recalls because the amount exceeded the 0.5% limit.”

What should consumers keep in mind when incorporating fermented foods into their diet?

Dr. Hutkins: “Yogurt has become one of the most popular fermented foods and is a great way to get beneficial probiotic organisms into the diet. However, many brands contain a boat-load of sugar. Try plain, or lightly sweetened versions and add your own fresh fruit. Greek yogurts, by virtue of their naturally thick body, are great on top of a baked potato or in guacamole.

“If you grew up as I did, with canned sauerkraut, try one of the many brands that are not heat-treated. They have a fresh flavor and crispy texture, plus they can contain live organisms, just like yogurt. Or for a bit more pizazz, try one of the fresh kimchi products – they are terrific.

“Or consider miso, a product many of us have become familiar with only recently since it’s often served as miso soup at sushi restaurants. It’s got a great “umami” flavor and works great in a lot of recipes, like low calorie salad dressing or over Asian noodles.

“Of course, calories and salt content do count, so some of these fermented foods should be enjoyed in moderation.”

It is easy to incorporate fermented foods into your diet. In fact, you probably eat and drink a few on our list already! Talk to your doctor if you have any questions or concerns about adding new foods into your routine. 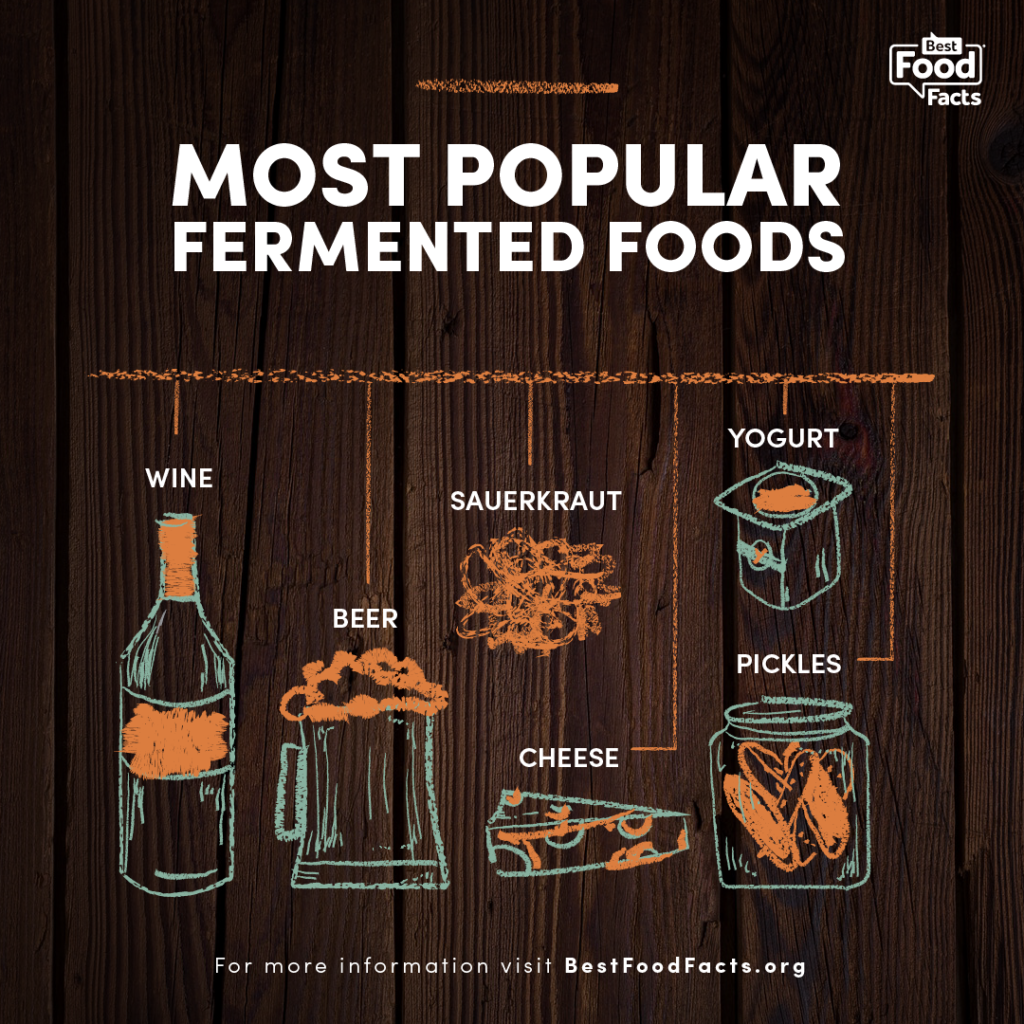