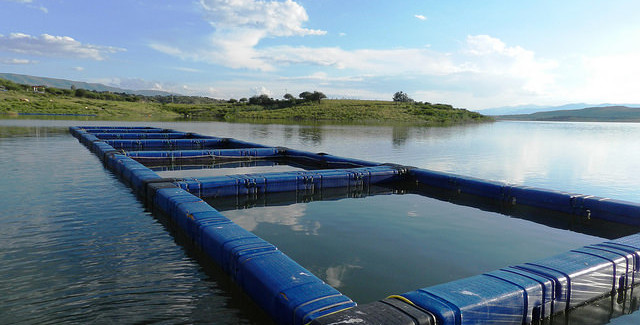 Seafood can be a great part of a healthy diet, and estimates of U.S. per capita consumption of fish and shellfish were 14.6 pounds in 2014. Seafood is a nutrient-rich food that is a good source of protein, vitamins and minerals. In addition, scientific studies continue to explore the relationship between the omega-3 fatty acids DHA and EPA in the prevention or mitigation of common chronic diseases. There are a number of sources consumers can find to satisfy their seafood cravings.

In the United States, the amount of fish and shellfish harvested from the wild is seven times greater than the amount produced by domestic aquaculture, but over half of the seafood that the U.S. imports comes from aquaculture. And more than 90 percent of the seafood consumed in the United States is imported from other countries around the world. In addition, aquaculture plays an important role in producing many popular seafood products including salmon, oysters and clams in the U.S. There are also concerns about the supply of fish available via wild capture, and any sustainable methods to supply the world with seafood will be explored.

To learn more about aquaculture, Best Food Facts checked in with experts LaDon Swann, PhD, Director and Associate Professor of Fisheries and Allied Aquaculture for Auburn University, and Kevin Fitzsimmon, PhD, Professor, Extension Specialist and Research Scientist at the University of Arizona.

What are some of the differences between aquaculture or farmed fish and wild fish?

Dr. Fitzsimmons: “Fish farmers focus on the best quality water they can find whether in raceways, tanks or ponds, or cages in the ocean, bays, lakes or rivers. Wild fish, especially in freshwaters, are often subject to polluted water and can accumulate toxins or heavy metals. Farmed fish get just the ingredients in the formulated diets and are grown and harvested quickly as opposed to wild fish that may have been in the water for many years. From the processing, retail and restaurant side, farmed fish are consistently available at known prices and known quality. Wild fish supply is inconsistent, variable in price and in quality.”

Are there any concerns with or disadvantages of aquaculture?

Dr. Swann: “There’s a lot of research to conduct to develop feeds and feeding programs, and control diseases at the hatchery. There are a lot of people that feel like aquaculture is bad for the environment, but if you do it the right way, you can mitigate environmental concerns. It just has to be done in a very sustainable way.”

Dr. Fitzsimmons: “Some of the concerns regarding aquaculture include the use of fish meal and fish oil in the diets of some fishes and shrimps. Over-harvest of forage fish to supply these species is expensive and depletes supplies of fish that are also eaten by many people, as well as some whales, dolphins, tuna, salmon, sea birds, seals, sea lions, etc. There are also concerns about too much concentration of fish farming in small areas and inadequate treatment of waste products.”

How do freshwater and ocean-based aquaculture systems differ?

What types of confinement are the fish kept in and how are they segregated from wild species of fish?

Dr. Swann: “There’s not really significant offshore marine aquaculture for finfish in the U.S. There’s an incredible amount of marine aquaculture for shellfish, clam and abalones, but only some testing for finfish. Those that have been grown and will be grown in the future will be in some type of system that lets the water circulate through some netting or cages to make sure they get enough oxygen, so they’re segregated that way. You can’t turn loose fish and expect to get them back so they do have to be confined in some way. Some examples of aquaculture systems include ponds, in-shore and off-shore cages, raceways and recirculating systems, and it really depends on the species to determine what system you would use.”

Does confining fish in some aquaculture systems create environmental issues (concentrations of nutrients and effluents beneath cages)? What management options can help control these issues?

Dr. Fitzsimmons: “Concentrated fish feeding systems used to be a serious environmental issue. But in recent years, the industry has made a huge effort to reduce these wastes through several management options. First is active reuse of the waste as fertilizer on plant crops. Irrigation of field crops with fish effluent or in aquaponics uses all the wastes as nutrients for plants and saves the farmer money that would have otherwise been spent on chemical fertilizers. Second, the nutrition experts and feed mills have reformulated feeds so that the fish are approaching a feed conversion ratio of 1.5 kilograms of feed fed to 1.0 kilograms of fish weight. Thus, the amount of food not assimilated and expelled as feces or urine is greatly minimized. Third, in marine systems, the farms are adopting variations of multi-trophic integrated aquaculture, where they grow filter feeding bi-valves and nutrient-scavenging seaweeds to capture the solids and dissolved nutrients from fish and shrimp.”

Dr. Swann: “Animals eat and excrete waste products, which include nutrients that aren’t converted to proteins. More research needs to be conducted, which could allow us to alleviate some environmental concerns. This is nothing more than farming, much like hog or cattle farmers work to minimize environmental issues. Through research over time, we’ll see environmental issues continue to decrease.”

Are there concerns if farmed fish mix with and interbreed with wild species?

Dr. Swann: “One of the lessons learned about fish escaping from confinement is that we should only grow fish that are native to the region, which helps minimize any dangers if they do escape. I’m not a fan of raising species that are not native to the area, because I’ve seen too many challenges arise. Even when they raise native species, farmers look to minimize or eliminate escapism because every time a fish escapes, that’s money out of the farmer’s pocket. The aquaculture industry continues to look for systems to reduce or eliminate escapism.”

Dr. Fitzsimmons: “There is a theoretical concern that a large release of farmed fish might interbreed with their wild cousins and affect the mix of genetic material such that the wild population might suffer. However, there are no documented cases of this having happened.”

What types of diets are farmed fish fed? Does this vary by species of fish?

Dr. Fitzsimmons: “Diets vary considerably for different species. In general, top of the line predators need more protein from marine origin, while lower trophic-level fishes can be fed more plant-based proteins and carbohydrates. However, again the nutrition experts and feed mills have been very clever in recent years with formulations that use less and less fish meal, squid meal and marine oils and more soy, wheat, processing by-products, algae and seaweeds.”

Dr. Swann: “University research helped farmers refine catfish diets from primarily fishmeal to incorporate more grain-based diets, reducing the need for fishmeal and making catfish production more sustainable. Farmers are always looking for the most cost-effective, nutritious  food for their fish. Once that research is there, the market will drive that switch from fishmeal-based diets to grain-based diets, primarily corn and soybean meal. Fish do a very good job converting protein to protein, so they have an inherent advantage over warm-blooded animals in terms of their feed efficiency.”

What are some of the most popular types of farmed fish? Are there certain species of fish better suited to aquaculture than others?

Dr. Swann: “Salmon is the number one finfish grown in a marine environment and farmers in Washington, Oregon and Maine do a great job controlling disease, escapism and nutrients with offshore salmon. Some species farmers have tried to grow include cobia or lemonfish, rarely seen on the market but instead in white tablecoth restaurants. Red drum is a candidate species because there has been some success growing this species on farms in South Texas. There are other candidate species, but a lot of research needs to answer questions on spawning, diets and production systems. People who are interested in aquaculture should really get some good reliable information before they just jump in — they can contact an extension specialist at their local land grant university for this information.”

Has the popularity of aquaculture increased? What does the future look like for aquaculture?

Dr. Fitzsimmons: “More than 50 percent of all seafood around the world is now farm-raised. Three years ago, for the first time in history, we raised and sold more farmed fish than beef on the planet. We are rapidly domesticating many of the most widely-consumed freshwater and marine plants and animals. Basically, we are doing in the last 40 years what we did with terrestrial agriculture in the last 4,000 years. By applying modern nutrition, genetics, engineering, reproductive biology, water treatment, and computer systems, we are able to be more productive with less environmental effects all the time.

Hunting and gathering from the ocean is a rapidly-dying industry that is dangerous, inefficent, causes pollution and by-catch and has never been as romantic as the popular press has implied. The stories of crab, sword, tuna and shrimp fishermen will soon be in the same lore as those who trapped beavers and shot buffalo and carrier pigeons. High insurance rates, high docking fees, and protection of marine areas of sport fishing will be the fianl nails in the coffin of commercial fishing. Domesticated aquatic plants and animals already supply more than half of all seafood with the proportion rising every day.”

Dr. Swann: “There’s been a steady increase in aquaculture production in the U.S. for decades, but there hasn’t been a big jump recently. It’s taken several years just to develop a process to grow fish in the Gulf of Mexico. A lot of the production technologies for these newer species are still in development, so that’s been an impediment as well. But overall, I think as long as we eat seafood, the demand for aquaculture will be there. Aquaculture complements wild fisheries very well. As wild fishery supplies continue to decrease, we are going to have to find alternative ways to provide seafood to consumers and I think aquaculture is one of those ways. So I think over time more seafood that is consumed will be farm-raised.”

The image “Fish Farming” by Luna sin estrellas is licensed under CC BY 2.0.