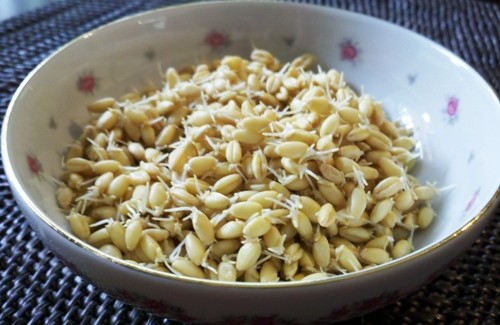 Sprouted Grains: The Next “It” Food?

You may have been seeing signs or hearing rumblings of sprouted grains – on television, on food packaging, from friends or online. What’s the big deal, and what are sprouted grains, anyway? We asked Anne Cundiff, RD, LD, FAND, for some answers.

Sprouted grains are whole grains or seeds that germinate and grow on their own by submerging and soaking in water and then placing in the right conditions to sprout. All the components of the grain or seed must be present: bran, germ and endosperm. Sprouted grains come from whole grains and ancient grains, so there isn’t a difference in the grain component, but there can be differences in nutrition, health benefits and tastes/textures.

Sprouted grains are going to be in the form of a product made from the grains. The most common sprouted and easy-to-find foods are breads, tortillas and crackers. Most of these items are found in the specialty health sections of grocery stores.

Are sprouted grains the next big food trend?

I think sprouted grains have always been trendy, but they’re gaining momentum. I have had more and more requests and interest from consumers on sprouted grain products, not only for their health benefits but for the delicious flavors and textures sprouted grains bring to different products. Toasted sprouted bread with natural peanut butter is one of my favorites!

Are there any nutritional benefits to eating sprouted grains versus other types of grains?

Do people with gluten sensitivity or intolerance need to worry about consuming sprouted grains?

Yes, always. If a person has a gluten intolerance or sensitivity, they still need to choose sprouted gluten-free or wheat-free grains such as millet, quinoa and rice. There is a possibility that some methods of sprouting may reduce the gluten in the grain, but it is best practice to consume grains that are always gluten-free to be safe.

Do you eat sprouted grains? Tell us some of your favorites!

The image “Sprouted Wheat Berries” by Nourishing Cook is licensed under CC BY 2.0.