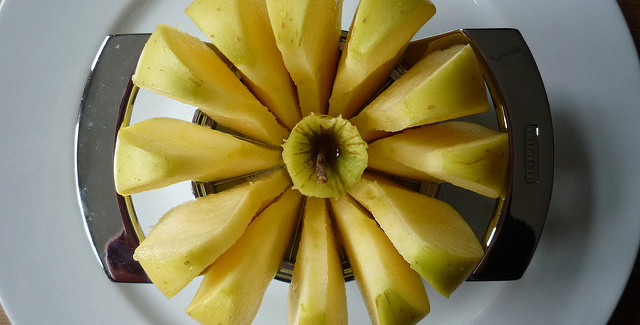 Last year we reported on a new variety of apples developed through biotechnology or genetic modification to not turn brown after being sliced. The Arctic Apple, created by Okanagan Specialty Fruits (OSF) of British Columbia, Canada, has had a lengthy government approval process, but has now been approved in the U.S. While the apples are currently in the growing phase, they are expected to be available on the market in 2017.

OSF sent us a few of the Golden Delicious variety of Arctic Apple for us to try. To find out if there was a difference in taste between the genetically modified apple and a traditional apple you can currently find at the grocery store, we put them to the test with our Best Food Facts team. Here’s what they said:

The image “In one movement….” by storebukkebruse is licensed under CC BY 2.0.