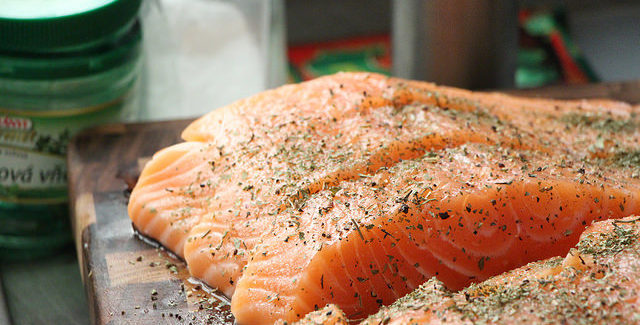 Late last year, the U.S. Food and Drug Administration (FDA) approved AquaBounty Technologies’ application for AquAdvantage salmon. The salmon is genetically engineered (GE) to reach market size more quickly than non-GE farm-raised Atlantic salmon. The FDA determined that this salmon is as safe to eat as other types of salmon, but many consumers still have questions about it.

To help answer these questions, we talked with Dr. Alison Van Eenennaam, Cooperative Extension Specialist, Animal Genomics and Biotechnology at the University of California-Davis.

How does genetically engineered salmon differ from conventional salmon?

The AquAdvantage salmon is a fast-growing Atlantic salmon. It is able to reach market weight in about half the time it takes conventional salmon and, as a result, requires about 20 percent less feed. This means a fillet of salmon can be produced more efficiently using less feed, decreasing the environmental footprint.

Why was this salmon genetically engineered?

This salmon was designed to continuously grow throughout the year, rather than decreasing growth in the winter months. Wild salmon typically grow more slowly due to feed scarcity in the colder winter months. AquAdvantage is growing its salmon in tanks, and will provide adequate feed to allow for consistent growth.

Does GE salmon offer any benefits?

This salmon enables a more sustainable approach to the production of Atlantic salmon. Currently, Atlantic salmon makes up over half of the salmon consumed in the U.S., and it is farmed in ocean-based net pens and imported from countries including Scotland, Chile and Canada. These facilities have some deleterious environmental impacts including pollution, escapement and the transmission of disease and pests from wild fish to the cultured fish, and vice versa. The efficiency of AquAdvantage allows for land-based production of Atlantic salmon to become a cost-effective proposition. The company is planning to grow the fish in contained tanks, which will preclude some of the environmental concerns associated with net pen-based aquaculture.

AquAdvantage Salmon enables a more sustainable approach to the production of Atlantic salmon.

How is the salmon genetically engineered?

Over a quarter of a century ago, a construct that contains a snippet of DNA encoding a growth hormone from the king salmon connected to DNA regulatory sequences from the ocean pout was added to the eggs of an Atlantic salmon spawn. A fast-growing fish was selected out of that spawn and was shown to be carrying the construct in its DNA. Since that time, the construct has been stably transmitted through normal inheritance over many generations, in the same way that I passed on my blue eyes to my kids.

Are there any safety concerns regarding consumption of the GE salmon?

The salmon is basically a fast-growing fish. This is a trait that is selected in many breeding programs. Because this particular line was produced through genetic engineering, it underwent a mandatory evaluation by the FDA. They found the fish was as safe to eat as conventional salmon and, under the proposed land-based growing conditions at a farm in the highlands of Panama, posed minimal risk to the environment. As with all technologies, risks need to be considered in comparison to existing production systems, and weighed against benefits. There are some known risks associated with existing production systems, such as the fertile lines of selected lines of Atlantic salmon escaping from ocean net pen-based aquacultural systems.

The image “Salmon” by Ján Sokoly is licensed under CC BY-SA 2.0.